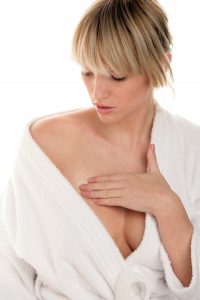 Breast reconstruction following either partial or total mastectomy (for either breast cancer or the breast cancer gene) is a complex subject requiring extensive discussion between the patient and the plastic surgeon.

Briefly, breast reconstruction can be divided into reconstruction using expander-implants and that using the patient’s own tissues. Thinner patients have less « extra tissue » to use for reconstruction, therefore expander-implants are more commonly chosen. First, an expandable balloon is placed under the pectoral muscle. After about two weeks, the balloon is gradually filled with solution in order to stretch the muscle and overlying skin. This « breast expansion » is continued every one to two weeks until the desired breast size is reached. Four to six months after the first surgery, the expander is replaced by a permanent implant during a second, much simpler operation. At the same time, a procedure may be performed on the opposite « normal » breast in order to achieve better symmetry. The advent of “skin-sparing” mastectomies along with the availability of treated cadaveric dermis (Alloderm) now allow for the possibility of indirect reconstruction with the final implant, in one single step.

If radiotherapy has been delivered to the breast or is a possibility after mastectomy, Dr. Nicolaidis tries to avoid expander-implant reconstruction because of the unacceptably high complication rate (around 50%). Therefore, reconstruction with the patient’s tissues becomes necessary. Among those reconstructive options, the prefered technique involves use of abdominal skin and fat to reconstruct the breast. This so-called TRAM flap (and its variations) therefore has the advantage of giving the patient a « tummy tuck » at the same time. Another popular technique uses the large back muscle with overlying skin ; however, an implant is usually necessary in order to compensate for the lack of volume. These reconstructions using the patient’s tissues are not only less problematic in the face of radiotherapy but also produce a more natural-appearing breast with longer-lasting results. The disadvantages of these reconstructions are longer, more complicated operations, longer admission to hospital as well as additional scars where the tissue is taken.

Regardless of the reconstructive choice, nipple reconstruction if/when desired by the patient is not performed until four to six months after the last surgery in order to allow the breasts to settle with gravity.